Stay silent for a change, in solidarity with young people 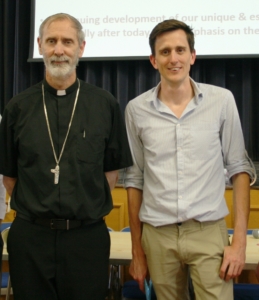 Danny Curtin with Bishop Alan at a recent Caritas meeting

The Synod on Youth, which came to a close in Rome at the weekend, has called on the whole Church to accompany young people, including those who are most vulnerable in life. The Synod Bishops concluded with a message to young people declaring that the Church “does not abandon you” and “is ready to accompany you on new roads”.

In its final document the Bishops called on the Church to value the abilities of young people and to accompany them, including those who are excluded. The Bishops invite us to ‘stand bravely’ by our young people’s side and discover together how all young people can live with dignity and how we can support them to play their part in building the common good.

Danny Curtin, CEO of Million Minutes, is inviting people to sign up now to use its ‘siLENT’ initiative as an opportunity to respond to this call. During Lent 2019 people are asked to take time to ‘stay silent for a change’ in solidarity with young people who are excluded, for whom silence in society isn’t a choice. Each minute is sponsored to raise money to support projects that accompany young people to change their lives and their local communities through projects that are based on Catholic social teaching.

Sarah Burrows, a young adult from London, took part in the Synod preparation meeting in Rome involving over 300 young people from across the world. She says: “I’ll be staying silent in Lent as I see the need turn the Synod vision into a reality. We must seek ways to accompany young people and to enable them to help transform society.”

Joe Beatie, coordinator of Walsingham House youth retreat centre in Brentwood Diocese, said: “As a youth minister, every day I meet the young people that the Synod calls us to accompany. I see their absolute joy and I see the struggles they continuously face. They have so much to share with us and we can learn so much from them, but they need the space to be heard. I look forward to joining siLENT in solidarity with them. I will be speaking up with my silence and helping to raise money to give young people a platform and a voice.”

The money raised from siLENT will help people like Andre. At 16 Andre was isolated from lessons at school due to his behavioural difficulties. Lonely and frustrated, Andre was given a second chance when volunteers from the local parish (funded by Million Minutes) encouraged  and accompanied him to help out at his local primary school. During the year his confidence grew so much that he built relationships with young people in his local neighbourhood. Knowing what being isolated felt like, he saw opportunities to include others, like supporting a child using a wheelchair to take part in a basketball game with his peers.  “I feel empowered,” he said. Andre overcame his own difficulties to use his voice to make a change for other young people.

Danny Curtin says: “Let’s speak up with silence. Sign up now for siLENT 2019. Instead of simply cutting out sugar or chocolate, take time to give up the things that fill life with noise and restlessness. By doing this you will not only allow time for silence, but your sponsorship will make a real difference to young people supporting the Church to accompany young people, especially those without a voice.”

Stay siLENT for a change. Get Sponsored. Change Lives.