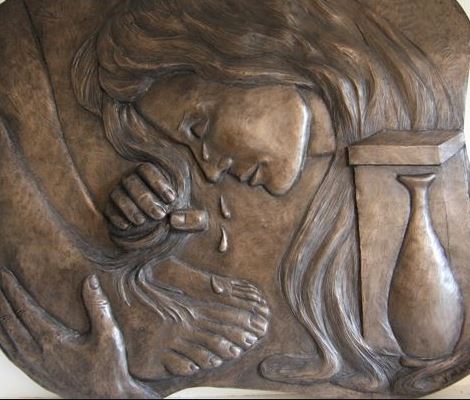 36 One of the Pharisees invited Jesus to a meal. When he arrived at the Pharisee’s house and took his place at table, 37 a woman came in, who had a bad name in the town. She had heard he was dining with the Pharisee and had brought with her an alabaster jar of ointment. 38 She waited behind him at his feet, weeping, and her tears fell on his feet, and she wiped them away with her hair; then she covered his feet with kisses and anointed them with the ointment.
39 When the Pharisee who had invited him saw this, he said to himself, ‘If this man were a prophet, he would know who this woman is that is touching him and what a bad name she has.’ 40 Then Jesus took him up and said, ‘Simon, I have something to say to you.’ ‘Speak, Master’ was the reply. 41 ‘There was once a creditor who had two men in his debt; one owed him five hundred denarii, the other fifty. 42 They were unable to pay, so he pardoned them both. Which of them will love him more?’ 43 ‘The one who was pardoned more, I suppose,’ answered Simon. Jesus said, ‘You are right.’
44 Then he turned to the woman. ‘Simon,’ he said, ‘you see this woman? I came into your house, and you poured no water over my feet, but she has poured out her tears over my feet and wiped them away with her hair. 45 You gave me no kiss, but she has been covering my feet with kisses ever since I came in. 46 You did not anoint my head with oil, but she has anointed my feet with ointment. 47 For this reason I tell you that her sins, her many sins, must have been forgiven her, or she would not have shown such great love. It is the man who is forgiven little who shows little love.’ 48 Then he said to her, ‘Your sins are forgiven.’ 49 Those who were with him at table began to say to themselves, ‘Who is this man, that he even forgives sins?’ 50 But he said to the woman, ‘Your faith has saved you; go in peace.’

This reading is characteristic of the Gospel of Luke, the gospel of the compassion of Christ. The longer version of the gospel reading continues with Luke 8:1-3 and its references to the women disciples of Jesus. The focus of this story is on the woman’s loving response to being forgiven. Awareness of God’s forgiveness through the presence of Jesus leads her to demonstrate her love in an intimate way. The forgiveness of God in Christ cannot be earned by good works, but is freely given to those who are aware of their sin and seek it. Simon the Pharisee, despite his virtue, is less aware of his need for forgiveness, and consequently less loving. In Luke it is often the unlikely person who provides the most powerful example.

Am I aware of my need for forgiveness?

Do I realise that forgiveness can never be earned, but that it is freely given by God?

Pray for the gift of gratitude for God’s patience and love.

Pray for those who see God as demanding and unforgiving.

Rev Dr Adrian Graffy is a member of the Vatican Commission that takes a lead in Bible scholarship, interpretation and promotion in the Catholic Church.

Rev Dr Graffy said of his five-year appointment by Pope Francis in 2014: “It is an honour to be nominated by Pope Francis as a member of the Pontifical Biblical Commission. I feel humbled and very much look forward to being of service to His Holiness and the Church.”

He added: “A great deal has been achieved in England and Wales in recent years by many co-workers to advance Biblical scholarship and the provision of easy-to-use resources. I would like to take this opportunity to thank them and the Bishops’ Conference Department for Evangelisation and Catechesis for their efforts to promote understanding and love of the Bible, particularly through the publication of the teaching documents, The Gift of Scripture and the study guide to Verbum Domini, The Word of the Lord.”

Rev Dr Graffy received his doctorate in Sacred Scripture from the Pontifical Biblical Institute in Rome in 1983. He taught for over 20 years in St John’s Seminary in Wonersh, and is Chair of the National Scripture Working Group, which is an instrument of the Department for Evangelisation and Catechesis of the Bishops’ Conference of England and Wales. Fr Graffy is a past director of Brentwood’s Commission for Evangelisation and Formation and parish priest of Christ the Eternal High Priest in Gidea Park, Essex. Among his publications are the Gospel of Mark and the Letter to the Romans (Alive Publishing).

‘Repent, for the kingdom of heaven is close at hand’

Second Sunday of Advent Year A

1st Sunday of Advent Year A

‘Jesus, remember me when you come into your kingdom’

Feast of Christ the King Year C
All Gospel reflections