Pope Francis' Encyclical on the environment 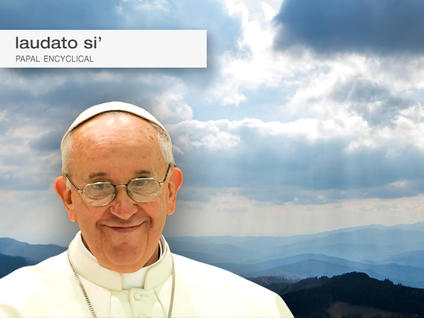 Pope Francis galvanised Catholics around the world with his Encyclical Letter on the environment and human ecology, Laudato si’ – On the Care for our Common Home.  The title, “Laudato si’,” (may you be blessed) is a quotation from St Francis of Assisi’s poem, The Canticle of the Creatures. The letter is addressed not only to Catholics but to everyone on the planet and urges them to go through an ‘ecological conversion’. People must be prepared to make simple changes to their lifestyles such as turning off lights and taking the bus to only cooking enough food to eat, he says, viewing such actions as acts of love.

In the letter, Pope Francis challenges us to consider the kind of world we want to leave to those who come after us. It’s not just an ‘environment encyclical’, it leads us to ask ourselves about the meaning of existence and the values at the heart of social life: “What is the purpose of our life in this world? What is the goal of our work and all our efforts? What need does the earth have of us?”

Pope Francis, quoting Pope Saint John Paul II, reminds us that, as Christians, we are called to be responsible custodians of creation: “Christians in their turn ‘realise that their responsibility within creation, and their duty towards nature and the Creator, are an essential part of their faith’”.

The Encyclical is divided into six chapters.

It starts by presenting the current situation based on the best scientific findings available today (Chapter one), followed by a review of the Bible and Judeo-Christian tradition (Chapter 2).

The root of the problems in technocracy and in an excessive self-centeredness of human beings are analysed in Chapter 3.

In Chapter 4, the Encyclical then proposes an “integral ecology, which clearly respects its human and social dimensions”, inextricably linked to the environmental question.

With this in mind, Pope Francis proposes to initiate an honest dialogue at every level of social, economic, and political life, that builds transparent decision-making processes (Chapter 5).

In the final chapter, recalling that no project can be effective if it is not animated by a formed and responsible conscience, ideas are put forth to aid growth in this direction at the educational, spiritual, ecclesial, political, and theological levels.

The text ends with two prayers. One offered for sharing with everyone who believes in “God who is the all-powerful Creator”, and the other to those who profess faith in Jesus Christ, punctuated by the refrain “Praise be to you!” which opens and closes the Encyclical.

Several central themes run through the text that are addressed from a variety of different perspectives, thus traversing and unifying the text:

Listen to CAFOD on Laudato Si’

Listen to an interview with CAFOD about what parishes in our diocese are doing.