A poignant service took place on the feast of St John the Baptist at the Colchester abbey that bears his name, as a Benedictine Abbot sang in Latin for the first time on the site in hundreds of years.

Eminent historian and annalist of the English Benedictine Congregation Abbot Geoffrey Scott OSB, from Douai Abbey, said the Mass in the gatehouse – all that remains of St John’s Benedictine Abbey – at the request of Jennie Guthrie-Stevens, a member of the Colchester Catholic Heritage Group. Jennie has done much research on St John’s Abbey and its history and gained the necessary permissions from English Heritage and Colchester Borough Council for the service to take place, albeit with just six persons present. 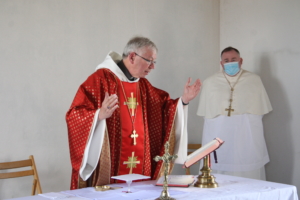 Abbot Geoffrey wore red vestments in commemoration of the last abbot, Blessed John Beche, who was executed outside the abbey walls in 1539, after refusing to acknowledge Henry VIII’s spiritual authority.  In his homily he talked about what is known of the abbot’s life and death, along with the Benedictine abbots of Reading and Glastonbury, who shared similar fates. “We have to remember that in the sixteenth century Church and state were together in a way they are not nowadays. Abbots were politicians and Blessed John had a seat in the House of Lords. This makes us realise what a struggle it must have been for the abbot to defy the king’s wishes.”

Although we have few traces of John Beche himself, he said, his pectoral cross remains. “English families which remained loyal to the old faith salvaged important items from the destruction of abbeys like Colchester at the dissolution of the monasteries.” Abbot John Beche’s beautiful pectoral cross was rescued by the local Mannock family, was smuggled to English Benedictine nuns in Brussels before eventually coming to the Clifford family in Ugbrooke, Devon. It is now in Buckfast Abbey – but returned to Colchester Museum for a loan period several years ago. “I’d like to think it wasn’t a chance survival, but that it was deliberately rescued and preserved by Catholics who venerated John Beche for the example of his life and witness of his martyrdom.”

Abbot Geoffrey, who lectures in Church History at Blackfriars Hall, Oxford, said more should be made of Colchester’s monastic legacy. “Last week I went to see a new carved head of Abbot Hugh Faringdon, above the gateway of Reading Abbey. Colchester should enhance its status in the same way as Reading has with its ‘Abbey Quarter’.” 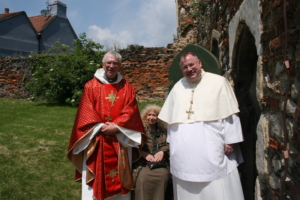 The Rt Rev Alan Williams sm, Bishop of the Diocese of Brentwood, in which Colchester is located, was represented at the Mass by Abbot Hugh Allan O.Praem, parish priest at Our Lady Immaculate, Chelmsford and the Apostolic Administrator of the Prefecture of the Falkland Islands and Ecclesiastical Superior of the Missions sui iuris of the islands of Ascension, St Helena and Tristan da Cunha. Prominent Essex Catholic Lord Petre was also one of the small congregation.  Philip Wise, from Colchester’s Museum Service, was also present.  Members of the Heritage Group, who are part of the Colchester parish of St James the Less and St Helen, made the necessary preparations and provided lunch afterwards for the visitors.