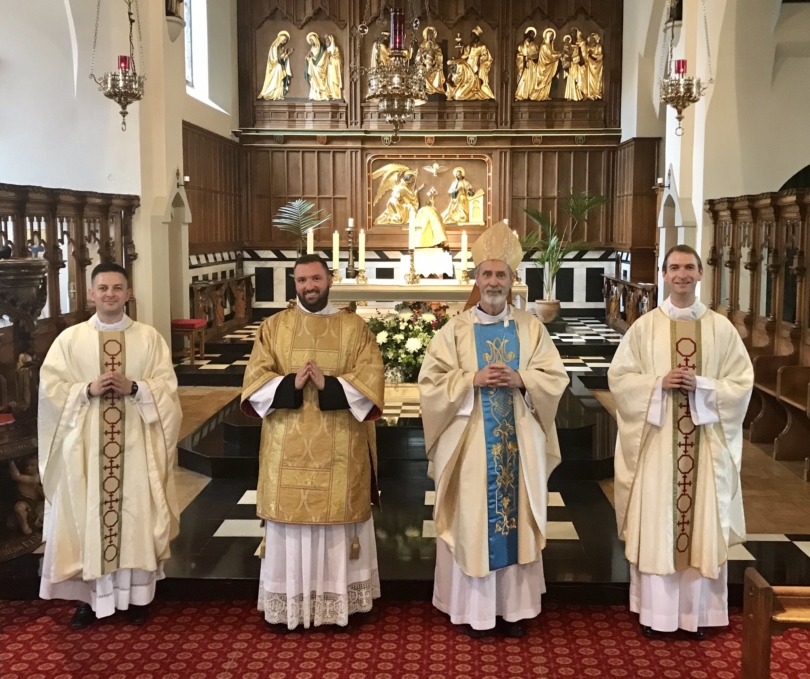 Michael Barwick became a deacon on Saturday at Our Lady of Lourdes & St Joseph in Leigh-on-Sea, in the last of the summer’s socially distanced ordinations. In normal circumstances, the ordination would have taken place at St Mary’s, Oscott and the seminary’s Vice-Rector, Fr Paul Keane, himself a Brentwood priest, was present to vouch for Michael as a worthy candidate.

Bishop Alan spoke of those who could not be there: Michael’s family in Ireland, Wales and England, friends from the Youth Service and Oscott. Despite the difficulties around Covid, he said, it was not just fortuitous but a grace-filled order of events that the rearranged ordination should fall on the weekend of the Assumption.

“Mary offered her body, her life to God. We pray for that same generosity and openness to God for Michael and for ourselves as we strive to be disciples of our Lord Jesus Christ.”

The Gospel of the Annunciation, he said, was known as the Golden Gospel in the Middle Ages and it has perhaps everything we need to know about the greatness of God, the love of God and the salvation offered by God through Jesus Christ. “The first astonishing thing is that when God decided to enter our world, he relied on a young girl. In a free conversation, she made a decision, a choice to be the Mother of God.” Not only did God so value humanity that he sent his Son to take flesh and dwell among us, but the whole plan of salvation depended on Mary, he added.

“The second astonishing thing was that she said ‘yes’, completely, utterly, totally, forever. The evidence is there in the New Testament, the Gospels, the history of the church – she said, by the grace of God, a perfect ‘yes’.”

He continued: “There is a constancy in Mary’s ‘yes’, a constancy in her life, in her witness that is a great source of consolation to Michael today. He is attempting in his own way to say yes to Almighty God – a complete, full, authentic ‘yes’.”

We all know what it is to say ‘yes’ to God – and to say ‘no’, said Bishop Alan. “We play games with God most of our lives. We try to say ‘yes’ but often say ‘no’. Somehow the world of sin in which we are immersed leaves its effects all the time. Sin clings so easily – we are very much aware of that.”

Mary, he said, showed how it is possible to be in this world and simply belong wholly to God. “She is the wonderful and only example of someone who could say ‘yes’, completely and utterly; the one human being graced by God so perfectly.”

Mary celebrates what it is to be Christlike, to be perfect in a imperfect world. “For Pope Benedict Emeritus, she is ‘the great believer’; for Pope St John Paul, ‘the first disciple of the Lord’.”

“We celebrate today with immense confidence, not in ourselves or the world around us, but because of Mary,” he added. “She is the guarantee enfleshed.”

He referred to his own and Michael’s love of Lourdes. “Be very sure that the grace of God and the prayers of Our Lady of Lourdes are with you today.” 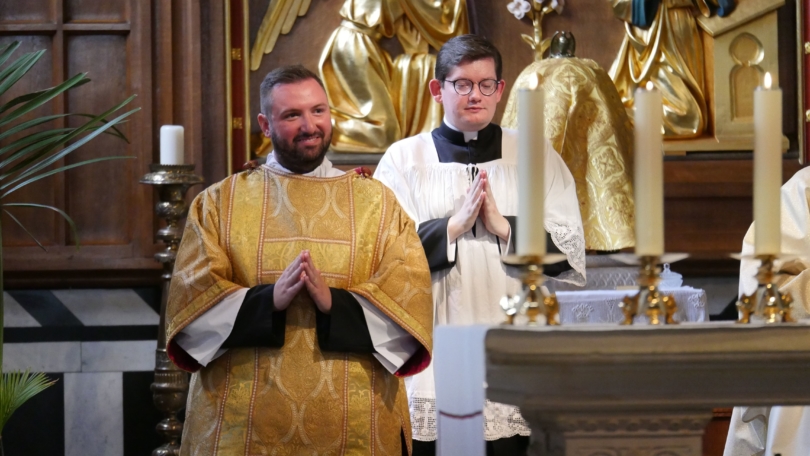 Michael himself says his connection with Lourdes is a strong one: he has visited the shrine many times with both HCPT and the Brentwood Catholic Youth Service and it is where he decided to become a priest.  Moreover, parish priest at Leigh, Mgr Kevin Hale, has been a real support in his vocation journey, so being able to hold the ordination in his church – dedicated to Our Lady of Lourdes & St Joseph – was particularly special. That vocation journey has been a considered one: Michael spent seven years at the Walsingham House Retreat Centre and considered becoming a teacher before discerning his priestly vocation. After his diaconal ordination, he said: “I felt so calm throughout and walked out full of joy. Lots of people remarked on the fact that I was beaming. It just felt so right.”

He said he felt quite emotional when Fr Paul presented him to Bishop Alan. “The words ‘I find this man worthy’ are very emotive.”

Later, while family friend Maria Webb was singing the litany of saints beautifully, Michael was prostrate before the altar. “That was very moving – lying there before God and praying.”

As Michael made his vows, Bishop Alan said: “Do the will of God generously, serve God and mankind… Lord, look with favour on this servant of yours. Send forth upon him your Holy Spirit. May he excel in every virtue, in love that is sincere, in care for the sick and poor, in self-discipline and in holiness of life.”

Subsequently, Deacon Kevin Lyons helped the new deacon to vest, along with Fr Gary Dench. “Deacon Kevin baptised me in my home parish of St Augustine, Chelmsford,” said Michael, “so it was lovely that he could be here.” 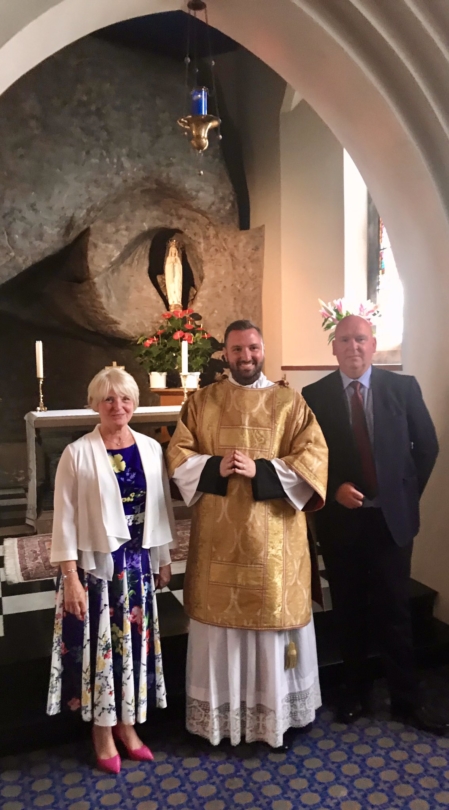 He expressed his gratitude to all those who have supported him in his journey and made the day so special: to James Devore who played the organ, to Maria who sang, and particularly to his parents, Ian and Bernadette. “They are so proud and supportive, so full of joy. They have been a real support and a rock for me as a seminarian.”

At the end of the month, he will be returning to Oscott for his final year of studies – and some practical work at a local parish. “Tomorrow, I will be preaching for the first time at St Augustine’s,” he said with enthusiasm. It holds no fears for him – his years running retreats at Walsingham House have stood him in good stead. “I really enjoy sharing the word of God and opening it up to people.”

Pictures thanks to Brenden Thompson 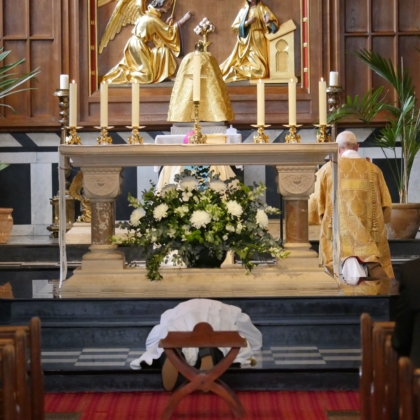 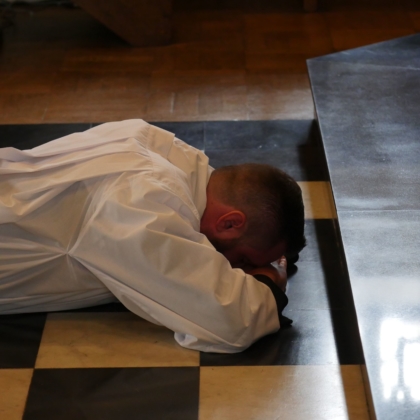 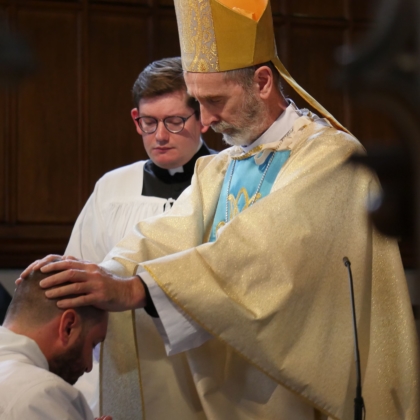 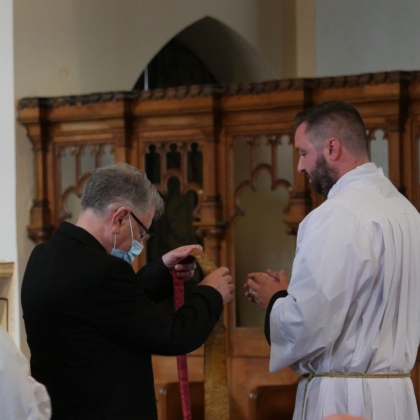 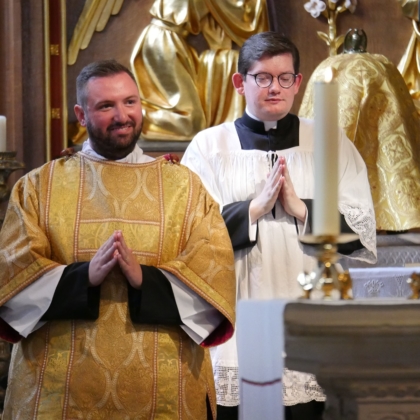 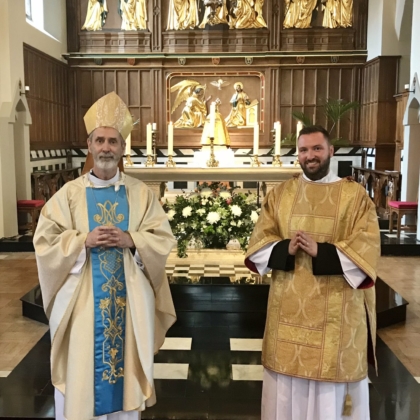 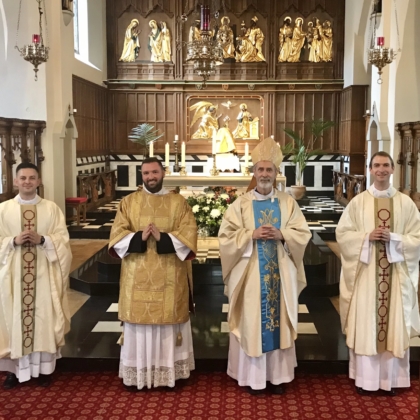 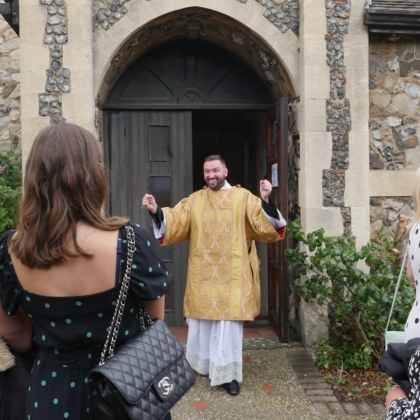 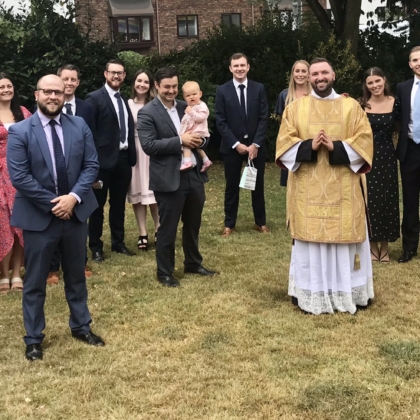 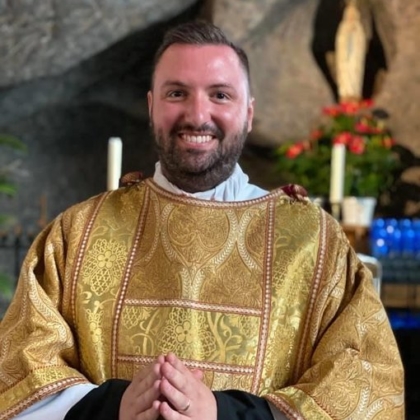 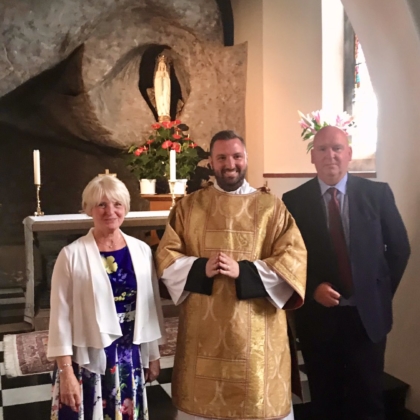 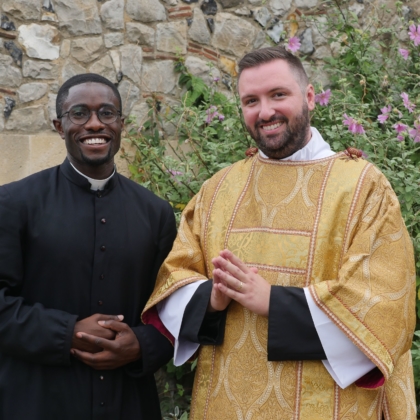