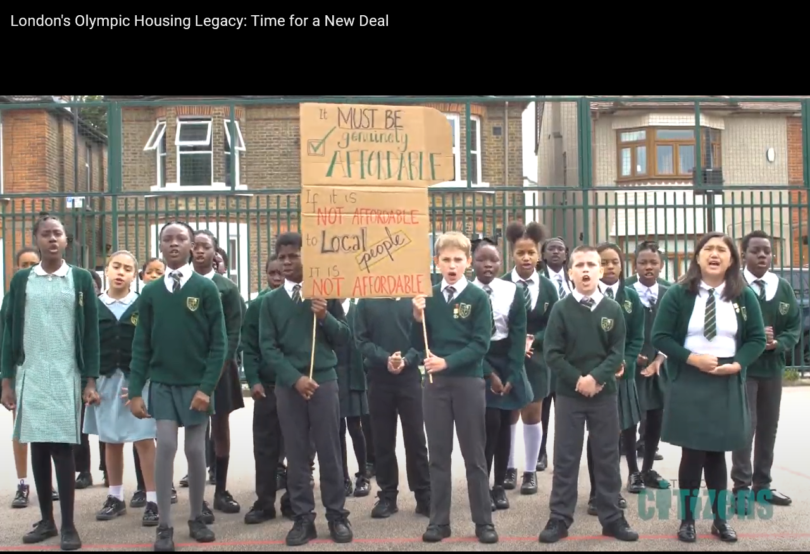 To mark the eighth anniversary of London hosting the Olympic and Paralympic Games, The East London Citizens Organisation (TELCO) has launched a film that highlights the broken promises around the London’s Olympic housing legacy and calls on policymakers to honour the pledges they made and work with TELCO for a New Deal on the Olympic Park.  Staff and pupils from St Antony’s Primary School, Newham, St Bonaventure’s School, Forest Gate and St Stephen’s Manor Park are among those taking part in the documentary, which captures two worlds: luxury/exclusive housing being built on the park and housing misery for those in the legacy boroughs.

Andy Lewis, Deputy Headteacher at St Bonaventure’s School, said in the film: “There are very few families, certainly from our school and the local community that have moved onto that legacy site. A lot of new people have moved into Newham, but a lot of those would be young professionals who are perhaps working up in the City because realistically they are the only people who can afford most of that housing.”

Jane Williams, CEO of the Magpie Project which supports mothers of the 2,000 homeless under-fives in Newham, attests to the housing misery experienced by many local people. “The problems we see are around temporary and emergency accommodation and very poor-quality accommodation. So they (families) can’t put down roots, they don’t know whether to change their child’s school from the borough which they have come from, because they literally don’t know whether they are going to move tomorrow or in three years’ time.”

Paul Amuzie, a Young Ambassador in 2004 on the Newham Young Mayors Team, was involved at the time:  “As a young man of 16, it was a real possibility that I would be able to buy a home… Fifteen years later…I look at the flats that are being built and it is not possible, because the agreements that we set have not been adhered too.  In four years, when Paris hosts the next Olympic games, we hope that there’s a better story to tell about the London Olympic housing legacy.”

What TELCO is asking for:

TELCO is willing to work with the Mayor of London, Legacy Boroughs, and the LLDC on a new deal for a housing legacy. There are three elements to this new deal, says Dr Bernstock: