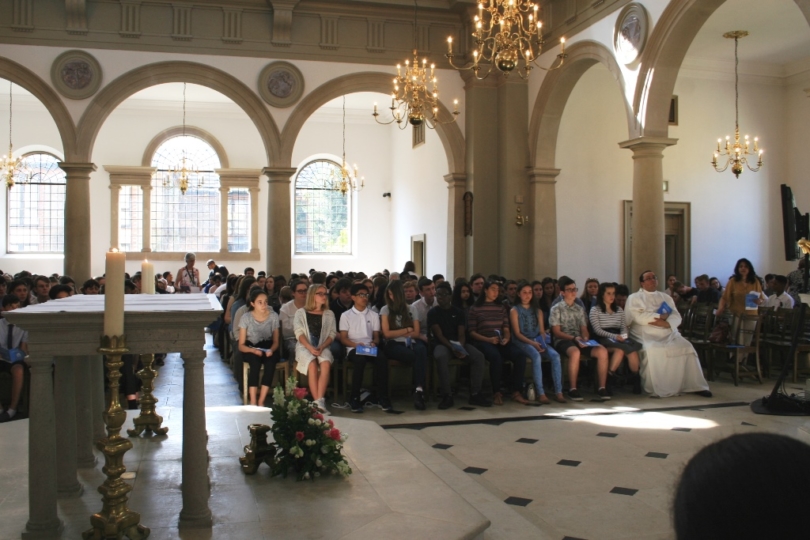 “Jesus is faithful – he will always be there for you,” was the message given by ex-speed skater and Franciscan nun Sr Catherine Holum to nearly 700 young people gathered at Brentwood Cathedral for the Rite of Acceptance. There to meet Bishop Alan prior to confirmation in their own parishes at Pentecost, they also heard Sr Catherine’s vocation story and a testimony from  a member of the Brentwood Catholic Youth Service. Fr Dominic Howarth, who has responsibility for youth ministry in the diocese, also invited them to take part in forthcoming events involving BCYS, such as Youth Gather and Flame (for details go to https://bcys.net/). 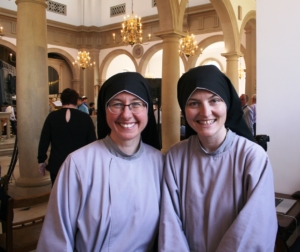 Sr Catherine Holum (left with Sr Antonia), a member of the Franciscan Sisters of the Renewal, proved an inspiring speaker. An American, she was an Olympic speed skater before becoming a nun 15 years ago. The sisters work with the poor in Leeds and visit schools, parishes and gatherings such as Flame to tell their story.

Sr Catherine explained how a pilgrimage to the shrine of Our Lady of Fatima when she was 16 had helped her discover God’s plan for her life. “It was completely unexpected. I heard a voice in my heart say ‘You are going to be a sister’ – and I felt a rush of peace and joy. I walked into the chapel of adoration and found tears of joy rolling down my cheeks. I knew that Jesus was real, alive and truly present there in the Eucharist.”

When she went home, she found herself praying the rosary, felt much more devout at Mass and prayed that she might do well in speed skating – she was trained by her mother who herself had been a very successful skater. “Things began to go very well and I qualified for the elite team, travelling on the World Cup circuit. I became the National American Champion as well as the Junior Champion and went to the 1998 Winter Olympic Games, coming 6th in the 3,000m and 7th in the 5000m.”

During that year, though, she started to feel restless. “I thought there is more to life than sport – and money and success.” A degree in photography followed but she forgot about that call at Fatima.

After university, though, she met a group of young people who were going on a Pro-Life walk across America, and decided to join them. “That walk transformed my life through daily prayer and the young people I was with. They were living disciples – they evangelised me through their lives.”

After a World Youth Day in Toronto, she visited the Franciscan Sisters of the Renewal in New York. “I saw the sister coming to meet me and felt a deep, deep peace. I knew I was home.” (Read Sr Catherine’s story here.) 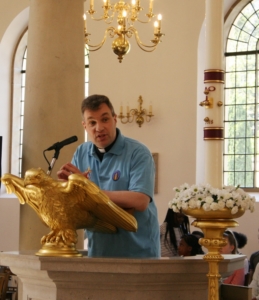 Fr Dominic Howarth (left) echoed her advice for young people searching for God. “Our lives are full of noise, image-related noise,” he said. “10% of all the photos that have ever been taken have been produced in the last 12 months. How hard it is to put our phones away! But there are tabernacles in the school chapel and the parish church. Why not sit there sometimes, just you and God and open your heart?”

Sr Catherine was asked whether she was afraid when she felt her calling. “No,” she said, “because I felt the presence of God in a great rush of peace and joy. There is a sacrifice to be made with every vocation we are called to – leaving family, friends our city – but I had a deep sense that God was always with me and would give me courage and joy in that vocation. Courage is fear that has said its prayers.”

Since then, she said, she has become more free as a person. “Knowing God loves me brings me my freedom.” As a nun, she said, she had attended four more World Youth Days, and had been to Rome and Lourdes. “Last year I was able to be at the 100th anniversary of the appearance of Our Lady at Fatima. It was incredibly moving as I had not been back since that pilgrimage at 16.”

Her young listeners responded to her enthusiasm and her story. Said one: “It was interesting – the way she went from sports to being a nun.”  And another: “It was really inspirational. It makes you want to be a nun – and go to those places.” 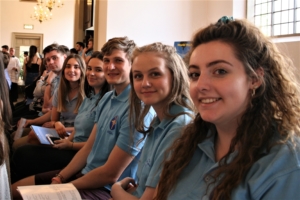 They also heard a testimony from Rachel Kwasnica, a member of the Brentwood Catholic Youth Service. She related the change in her attitude to her Catholic faith once she got involved with the group. “I used to find going to church a bit of a chore – and I was embarrassed about admitting that I was a Catholic at school.” Following in her brother’s footsteps, she went to her first BCYS Youth Gather event in 2014 and made new friends, going on to support elderly and disabled pilgrims at summer Lourdes two years later. “It was one of the most tiring weeks of my life but it was also fun-packed and hugely rewarding,” she said. After attending her third Lourdes pilgrimage this year, she is set to do a year’s voluntary work with the BCYS team at Abbotswick from September. She concluded: “I cannot stress enough how much BCYS has influenced and helped me grown in my faith and as a person. Nowadays it is not seen as very cool to be Catholic, but I find that my time with the youth service has proved that notion to be wrong.” 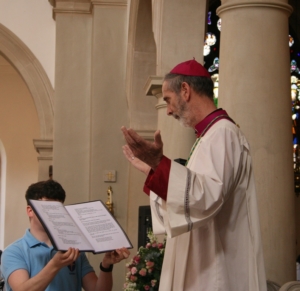 Bishop Alan emphasised that support can be transformative, whether for runners at the London Marathon (happening earlier that day) or for Rachel at BCYS. He recalled his time at World Youth Day in Krakow, where 2.3 million people were present for Mass with Pope Francis. “When we think that there are 1.6bn members of the Catholic Church in the world, that can help us.”

He urged the young people present to be courageous at their Confirmation at Pentecost. “At the first Pentecost, the early Christians were not courageous. Jesus had died; they were terrified, paralysed with fear. Then God’s Holy Spirit transformed them in an instant. They went outside and were courageous. They found that people listened and understood them and were converted. They realised that the gifts of the Holy Spirit were tumbling in upon them.”

Those gifts, he said, include faith instead of doubt, hope instead of despair, love, peace, gentleness and more. “In honesty before God, think about which gift of the Holy Spirit you most need. My guarantee is that it will be given to you at Pentecost.”

He concluded: “We have the freedom to walk away from God but He never forgets us.” 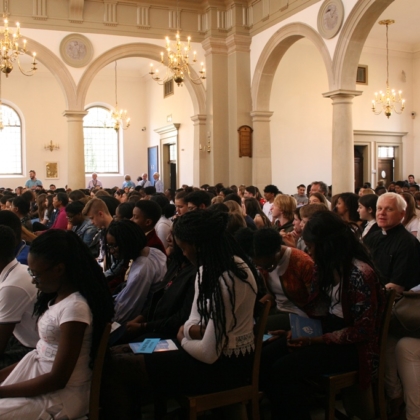 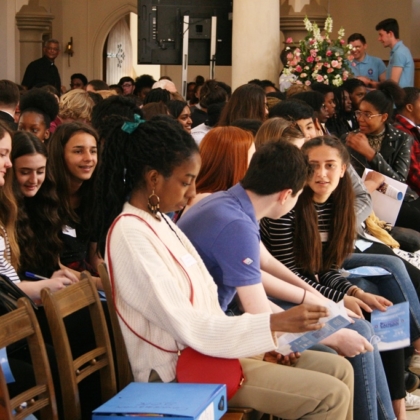 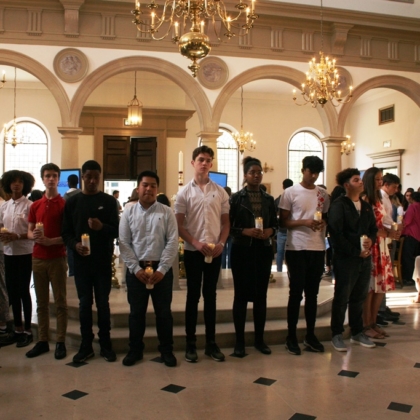 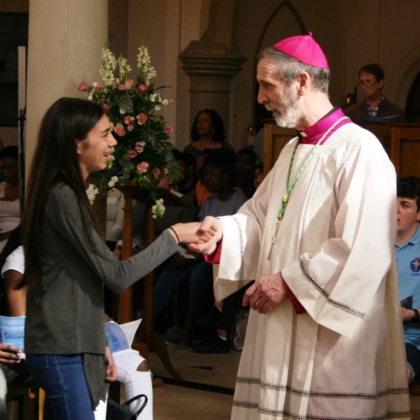 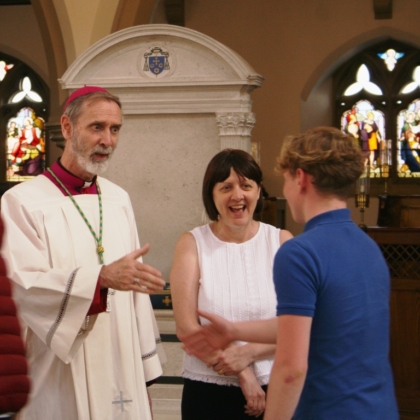