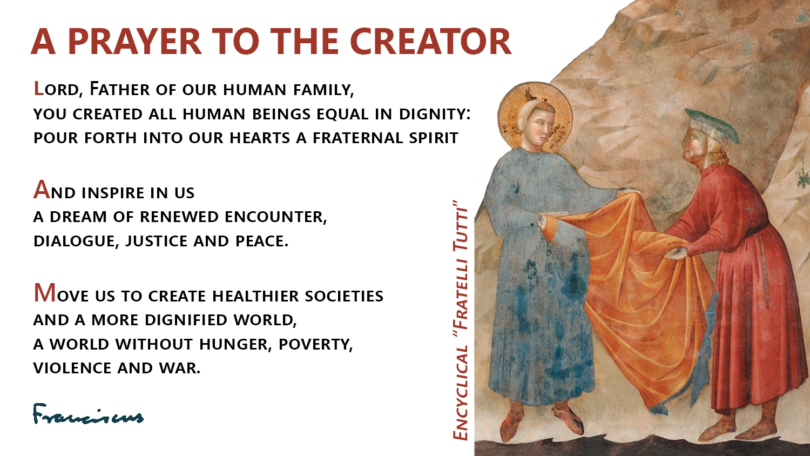 It focuses on fraternity and social friendship and the Pope says that he was inspired to write it by Saint Francis himself, “the saint of fraternal love, simplicity and joy”.  In his introduction, Pope Francis says Saint Francis called for a love that transcends the barriers of geography and distance, and declared blessed all those who love their brother “as much when he is far away from him as when he is with him”.

“In his simple and direct way, Saint Francis expressed the essence of a fraternal openness that allows us to acknowledge, appreciate and love each person, regardless of physical proximity, regardless of where he or she was born or lives.”

The Encyclical, which comprises eight chapters, aims to promote this universal aspiration, advocating a change in politics to reject the “virus” of radical individualism and build up the common good. In the background is the Covid-19 pandemic which, Pope Francis says, has helped demonstrate that “no one can face life in isolation” and that the time has truly come to “dream, then, as a single human family” in which we are “brothers and sisters all”.

Dr Anna Rowlands, a Catholic social teaching professor at the University of Durham who was a participant at the press conference to launch the Encyclical, said the document was an attempt to bring a “bleeding and broken world back to health” and it challenges “our economical, political and ecological life”.

Chapter One
Dark clouds over a closed world

Chapter Two
A stranger on the road

Chapter Four
A heart open to the whole world

Chapter Eight
Religions at the service of Fraternity in our World