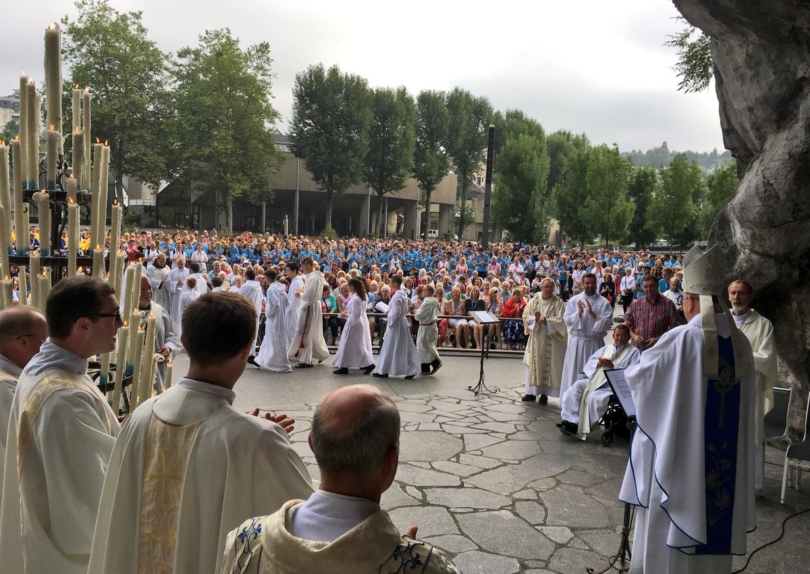 Those of us who went to a Catholic primary school probably first heard the story of St Bernadette there – a little peasant girl who saw visions of the Virgin Mary. She described Mary as a “beautiful white lady”.  Now, thousands of people flock to the grotto of Massabielle in Lourdes where the visions happened in about 1858. The shrine has a natural sacred spring where sick pilgrims come to seek a cure or maybe respite from their illness.

In the 19th century, Lourdes was a medium-sized town in the Hautes Pyrenees on the borders with Spain. A great fortress rises at the highest point of the town, no doubt built to withstand any sieges by crusades from Spain. Now the town is a bustling mass of international travellers filling the many hotels and crowded streets. They come to venerate the place where Our Lady appeared to this holy young girl. The grotto where the apparitions took place is a rocky outcrop on the left bank of the river Gave, part of a chain of grottos opened up into deep caverns in the mountains.

My group from the Maldon and Burnham parish experienced five eventful days. Beyond the very busy streets and shops, it was a short walk to the Domaine – an expansive area – at one end the magnificent Rosary Basilica and Rosary Square facing the crowned Virgin Statue; at the other end of the green Esplanade the statue of Breton Calvary. Each evening, torchlight processions took place around the Esplanade finishing in the Rosary Square – and this year members of the BCYS proudly carried the beautiful illuminated statue of Our Lady. So many pilgrims of all nationalities gathered together with hymns and prayers filling the huge Basilica Square.

The shrine at the Grotto, in a rock cavern, is overlooked by a beautiful white statue of Our Lady. After a while it is easy to be drawn into this silent, peaceful security, regardless of the great number of pilgrims praying there. This year the Brentwood Diocese joined with the Liverpool Diocese in the Grotto in a prayerful and united Mass.

The Blessed Sacrament Mass was held in the vast underground Basilica with many hundreds of pilgrims from all over the world. There was a great procession of banners, many held around the sides of the altar; then followed the priests and clergy to the strains of solemn choral music. The stillness and silence when the lights dimmed and the Blessed Sacrament in its golden monstrance was placed on the huge central altar for everyone to revere was very moving. And then followed the great blessing.

The Stations of the Cross are depicted in two places – the High Stations on a hilly area above the  town. Here the figures are of bronze and life size. The Way of the Cross is followed, in parts by steep, stony paths and even the hardiest of pilgrims might struggle to complete this journey – hopefully a feeling of overwhelming love will be felt at the last.

The Low stations were created 2003-2008. They consist of white, luminous, marble sculptures. These monumental statues create a spiritual atmosphere amidst the great rustling trees and alongside the gently rippling waters of the river Gave nearby. Particularly expressive are the hands and eyes of Jesus and Mary.

Fr. David led the assisted pilgrims to each station, inviting readers from the group, then followed with prayers. It was a very emotive and holy journey. 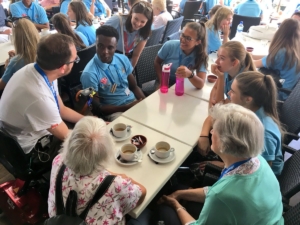 The assisted pilgrims have to thank the BCYS for all their dedicated involvement during the busy pilgrimage programme. The fine youngsters arrived at the hotels prior to all the masses to man the wheelchairs to take the assisted pilgrims to all the various chapels. We also had the opportunity to exchange dialogue with them about their pilgrimage and their aspirations for the future. There was much fun between the elderly and the young which made for happy amusing banter!

Towards the end of our time in Lourdes the pilgrims from Maldon and Burnham met with Fr. Mark on the prairie side of the river Gave, opposite the Grotto, to recite the Rosary. This was followed by the lighting of a large candle dedicated to the combined parishes – so a quiet contemplative moment with prayers towards the end of our pilgrimage together.

Last but not least, it was good to have Fr. Mark Reilly with us, also staying in the Solitude Hotel with his parishioners.

The sincere thanks of the pilgrims must go to all those involved in the organisation of the pilgrimage – the presence of Bishop Alan, the convocation of parish priests, Mrs. Cathy O’Connor, “prime organiser extraordinaire”, Fr. Paul Keane, the medical team, carers and the BCYS.