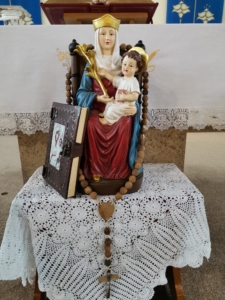 Canon Brian O’Shea at the parish of St Thomas of Canterbury, Grays is due to retire at the end of August and has instigated a last parish project. Over the years Fr Brian has performed many good works in Grays including the re-introduction of both the annual Forty hours devotion and the May devotions, the transforming of the main hall into Our Lady’s Undercroft, and the handing out of 2,000 miraculous medals and 1,600 missionary rosaries to all parishioners.

Now, Fr Brian has set up a 54 Day Rosary Novena as his last good work for the parish before he leaves. This consists of six consecutive nine-day novenas. The first three novenas (the first 27 days) are offered for the intention. While the last three novenas (the last 27 days) are offered in thanks to God in anticipation of granting the favour. Each day of the novena consists of five decades of the rosary.

The novena began on 23 June and has three intentions: Our Lady’s intentions, an end of Covid-19, and the intentions of participants. It has been well supported by parishioners and others – so far more than 130 people have opted to take part at home or with friends via Skype including Rt Rev Thomas McMahon, Emeritus Bishop of Brentwood, and Fr Brian’s successor, Fr Martin Hardy. Others in America, Africa and Asia have become involved too as they watch the parish livestreamed Sunday Mass, now preceded by the Rosary. (https://www.youtube.com/watch?v=m98t4j5f_-o)

At the end of Mass on the Solemnity of Ss Peter and Paul – the sixth day of the Novena, Canon Brian thanked everyone, from all over the world, who has joined in ‘our great Novena’. “May it bring graces; may Our Lady’s graces be with us in wonderful ways to overcome this pandemic. She is always there in trouble, in pain, in pestilence, in this virus; always there to save us, to intercede for us in times of trial. She is there – but we must respond. So we are saying the rosary together each day and praying for an end to this pandemic and the beginning of a new era of peace and love in our world. ” 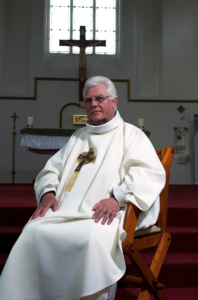 In his homily for the Solemnity of SS Peter and Paul, Canon Brian O’Shea referred to the recent funeral of his friend Fr Paul Dynan (right), lately parish priest of Tilbury and Stanford-le-Hope.  He quoted the words of Fr David Ssenkaayi, a priest from Uganda who is a regular visitor to the Tilbury parish. “On the night before the funeral, Fr David texted me saying ‘although I can’t be with you, I am with you in spirit thousands of miles away’.  And he said something that we would echo of Fr Paul, with his long illness: ‘he fought the good fight’ – the words of St Paul.”

“Both Peter and Paul are the patrons of all of us who get things wrong, who fail, who sin and with the help of God’s grace, pick ourselves up and begin again,” he said.

“Remember Peter, who became the first Pope, in the Garden of Gethsemane, denies the person he loves. Yet he lives to see a better day. He will repent and, in his sorrow, Jesus will build him up to become the shepherd of the flock – the rock on which Jesus will build his church. With God’s grace, everything is possible.”

St Paul, he said, was present and approved of the stoning to death of St Stephen, the first Christian martyr. “Yet St Paul became the teacher of the world through the grace of God, through the revelation he received. Both men failed and denied Christ in serious ways but both received the grace of God and that is everything.”

He continued: “You may be feeling a bit worn out, exhausted by the present situation but we trust in the Lord who will lead us onto good things: greater understanding of each other, greater tolerance, more justice in the world, more peace and human rights for all.” He added: “Through the grace of God, may we, through all of this, fight the good fight.” 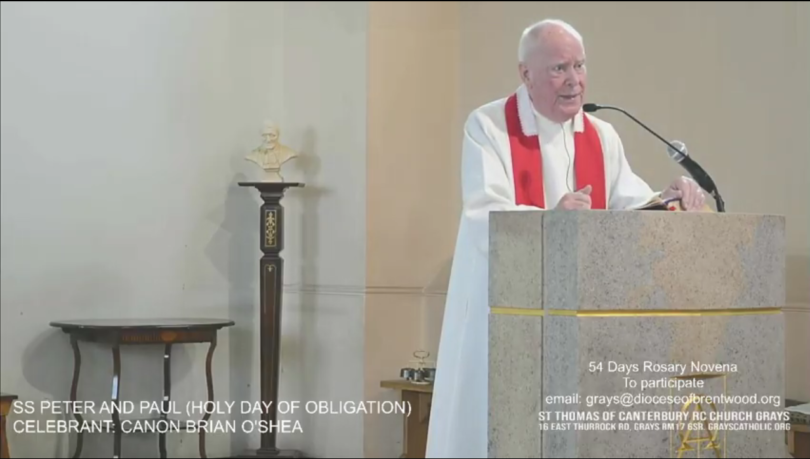 Published courtesy of the Thurrock Gazette

Canon Brian O’Shea, Fr Paul Dynan and Reverend John Guest have been awarded the prestigious Freedom of the Borough, a rare honour which has only been presented five times in nearly 40 years, for their outstanding contribution to Thurrock.

The tribute comes as Canon O’Shea and Revd Guest retire from their roles. Sadly Fr Dynan passed away very recently but was made aware of the honour by Councillor Martin Kerin shortly before he died.

The three men graciously served across the borough at Our Lady and St Joseph in Stanford-le-Hope, St Thomas of Canterbury in Grays and Our Lady Star of the Sea in Tilbury and St Margaret’s Church.

Thurrock Mayor, Councillor Terry Piccolo, will present the awards to Canon O’Shea, Revd Guest and the family of the late Fr Dynan at a formal ceremony later in the year, with all being sent a letter from the Mayor and Deputy Mayor, Councillor Sue Shinnick, informing them of this recognition.

Councillor Piccolo said: “I am delighted that these men have all been recognised for the hard work and dedication that they have put into serving Thurrock and its residents.

“The Freedom of the Borough is an honour held in the highest esteem, and is bestowed to individuals so we can publicly recognise their invaluable contributions to our borough’s civic and pastoral community.

“My heartfelt congratulations to you and your families. I offer my deepest condolences to Fr Dynan’s family, friends and all those who knew him. I hope that this recognition of the role he played in our community offers some comfort at this time.”

Deputy Mayor of Thurrock Council, Councillor Sue Shinnick, added: “I also extend my congratulations. “This is a fitting tribute to all three clergymen who have had a notable and lasting impact on the Thurrock residents they have supported over many years. They deserve to be recognised for their efforts and we offer this award as a token of our gratitude.”