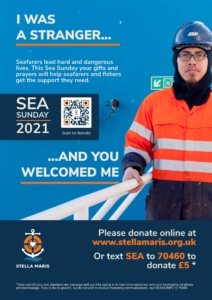 Sea Sunday (which this year falls on 11 July) is a special time for Stella Maris (formerly called Apostleship of the Sea), the official maritime welfare agency of the Catholic Church. This is the day every year when the church celebrates and prays for all those who live and work at sea.

As a global maritime charity, Stella Maris has been playing a crucial role in supporting seafarers and fishers during the COVID-19 pandemic, and is continuing to offer spiritual and practical help to those most in need.

It has been well-documented how India has been struggling with a devastating second wave of coronavirus. Thousands have been dying on the streets as hospitals there find themselves running out of oxygen.

Now, though, more than 1,000 Indian seafarers’ families affected by the COVID-19 pandemic will benefit from support in the port of Cochin.

Through Stella Maris’s involvement, 10 oxygenators are being purchased.  This will prevent an estimated 60 lives a month being lost to the virus, amid a drastic shortage of oxygen tanks in hospitals.

With the charity’s and its donors’ support, 1,100 food parcels are also being purchased and distributed to seafarers’ families in Cochin devastated by COVID-19. Each parcel is sufficient to feed a family of five for one month.

Pandemic precautions in the United Kingdom have also led to the charity adopting different approaches to its work with seafarers and fishers around the UK.

Seafarers have expressed their gratitude for being able to stay in touch with their families, through Stella Maris’ provision of internet access in ports thanks to Wi-Fi Units.

When this has not been possible, top-up cards for mobile phones have been provided to seafarers by the charity. These have been invaluable to seafarers. Captain Flover Santos, the Master of a tanker, expressed his thanks, when Stella Maris in Tees port provided top-up cards to the crew who were not allowed to leave their ship to go ashore at any of the ports at which they were calling.

“You help us to connect with our families. You guys are truly friends, and an instrument of God,” he said.

Seafarers need help now more than ever. A survey Stella Maris conducted found that 69% of seafarers suffered significant financial impact during the pandemic.

Almost half said they support three or more people with their income, and their top concern was feeding their families.

Financial worries like these and the stress that thousands face from having to spend more than a year on board due to extended contracts or, on the other hand, not having any work at all, has had a negative effect on their mental, emotional, and psychological wellbeing.

Adrian Gannon, Director of Development at Stella Maris, has appealed to Catholics throughout the United Kingdom to support Sea Sunday.

He said: “On Sea Sunday this year, we will thank God for the seafarers and fishers who have kept food and medical supplies moving during the pandemic and for the sacrifices they have made over the last year to supply our provisions.

“We will pray to Our Lady, Star of the Sea, to protect them in harsh conditions at sea and from coronavirus.

“We respectfully appeal to readers to support our ministry with fishers and seafarers at this critical time by praying for them on Sea Sunday and kindly making a donation to support our work through our website: www.stellamaris.org.uk/donate/. We will be especially grateful for any support you can kindly provide.”